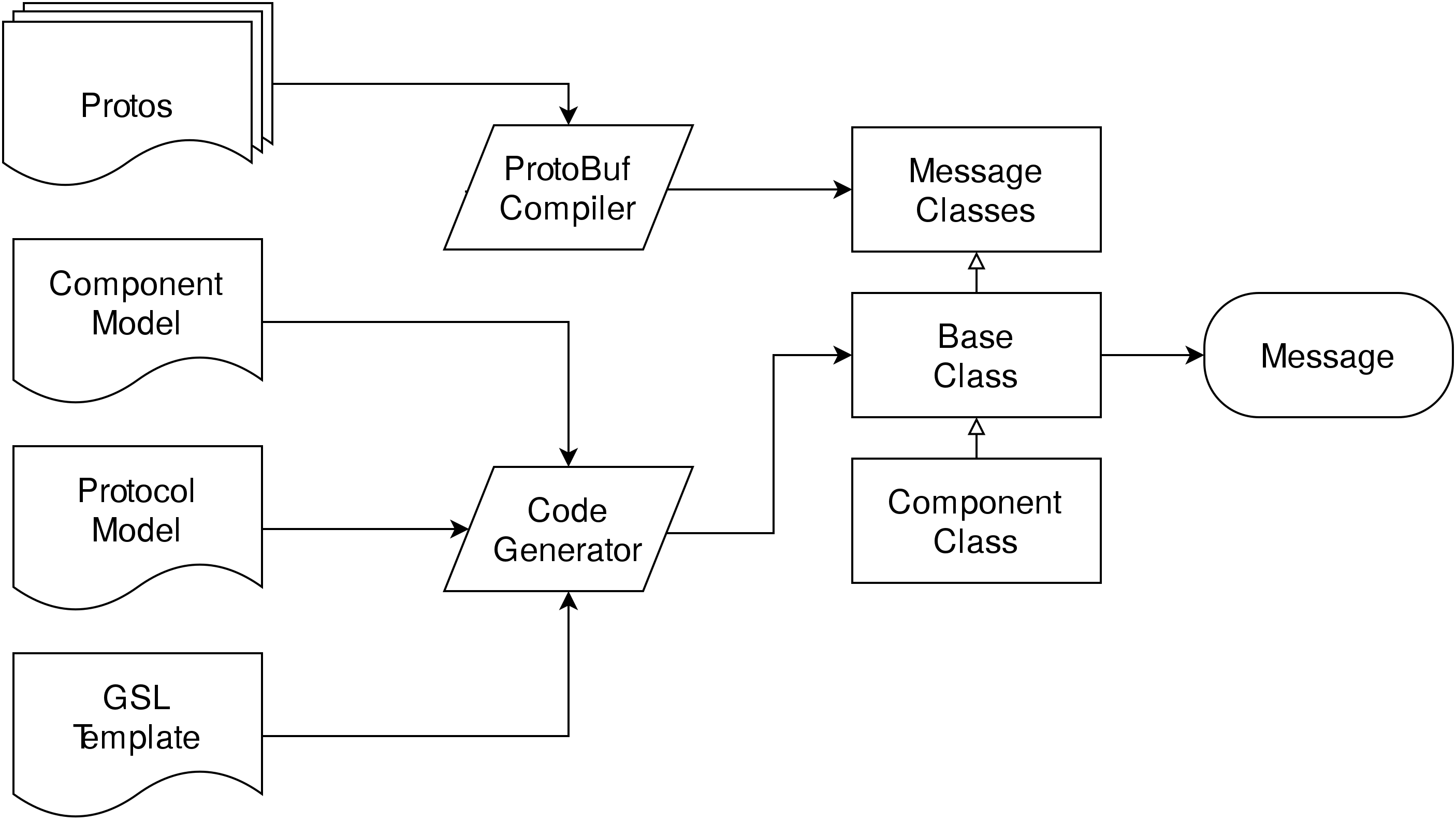 In this section, I describe the part of Machinetalk which probably needs most explanation. What I'm talking about is Machinetalk GSL - language bindings for Machinetalk using code generation.

But before we delve deep into code generation and meta-programming I recommend you to read the previous parts of Machinetalk explained:

A Case for Model-Driven Software Development

Before I start to explain MOP (Model Oriented Programming) it is important that you understand the reasons behind choosing this development approach.

I began to work on Machinetalk when I started the QtQuickVcp project. The project is a combination of UI components and Machinetalk bindings written in Qt/C++. It turned out that coding the language bindings rather simple using ZeroMQ and Protobuf. However, the hardest part was to look up the Machinetalk API in the Machinekit code sources and to implement the protocol flow correctly.

As a programmer, I know that whenever you need to do a repetitive task it is time for abstraction. Your abstraction can be a function, an object or a module. But, we are usually only taught how to abstract in a particular programming language.

However, this particular problem is only partially solvable using language dependent means of abstraction. For example, we could introduce abstract Machinetalk service classes in C++ to make the task less repetitive. You can easily see that we need to do the same thing again in Python and any other programming language. The problem gets worse the fewer means of abstraction a particular programming language offers - think of a C Machinetalk language binding for example.

When studying the ZeroMQ reference manual - the zguide I came across the Code Generation section mentioning the GSL tool. It easily caught my attention since iMatix claims to use it to build protocols themselves.

Now that you have seen the problems that lead me to explore the MOP approach for Machinetalk it is time to explain Model-Oriented Programming.

Model-Oriented Programming (MOP) is the application of model-driven development methods to programming. In comparison to traditional Model Driven Architecture (MDA) development approaches it does not depend on any general-purpose modeling language such as the Unified Modeling Language (UML).

Scientists found that model-centric software development approaches have not been widely adopted although they are in general considered good practice. A majority of the interviewed programmers claim that they do not think the generated output of code generators can be considered decent code.

Furthermore, general-purpose modeling languages are often found to be too generic. In MOP this problem is approached by developing not only domain-specific abstract models but also code generators for domain-specific modeling languages. Therefore, MOP can be applied to express concepts related to the problem domain. From these models not only code skeletons without a function can be generated but also full working software components.

MOP is most useful for projects that require repetitive coding. Moreover, models created in the process of MOP are technology and language independent and convertible to domain-specific and optimized source code. An advantage compared to general-purpose modeling languages is that code generators can be optimized to generate high quality and human-readable source code.

GSL by iMatix is an open source code construction tool and MOP language.
GSL uses simple XML documents without style sheets and namespaces as model files. Therefore, GSL is a Textual Modeling Language (TML) and shares all the benefits of text-based modeling.

You need no special software to edit GSL files. However, I found it most useful to use GNU Emacs to edit the gsl files. Put the editor into the major-mode for the corresponding language (e.g. python-mode) and enable the following minor mode by issuing gsl-mode.

I found the electric indent mode very annoying when editing GSL files. You can easily turn it off by issuing electric-indent-mode.

The GSL interpreter uses XML and GSL documents as input. It extracts data from the XML files and pushes it into a data tree.

The GSL interpreter interprets GSL documents in template or script mode depending on the selected mode.

If the interpreter is in script mode it interprets each line as GSL command except lines starting with a . symbol. All other lines are directly output to the specified output file.

In script mode, the interpreter does the exact opposite.

I personally prefer examples over long descriptions. Therefore, I created a simple GSL example for generating Python classes from an abstract model.

The model model.xml looks as follows:

To generate code from the model we need a GSL template. The template pygen.gsl looks as follows:

As you see, without proper code highlighting the template becomes rather confusing. With the gsl-mode enabled the same code looks as follows:

When we execute the script with the following command gsl -script:pygen.gsl model.xml this results in the Python module foo.py:

Of course, we wouldn't create a model for such a simple problem in real life. However, it demonstrates the capabilities and the simplicity of GSL very well. We also see that the approach becomes saner with increasing complexity of the model which would be in this case if we add more modules, classes, and properties.

Now that we have seen the tools used for generating the Machinetalk language bindings it is time to explain the modeling approach.

The Machinetalk middleware design is split into sub-models to decrease the complexity of individual models and to separate the scope of each model. 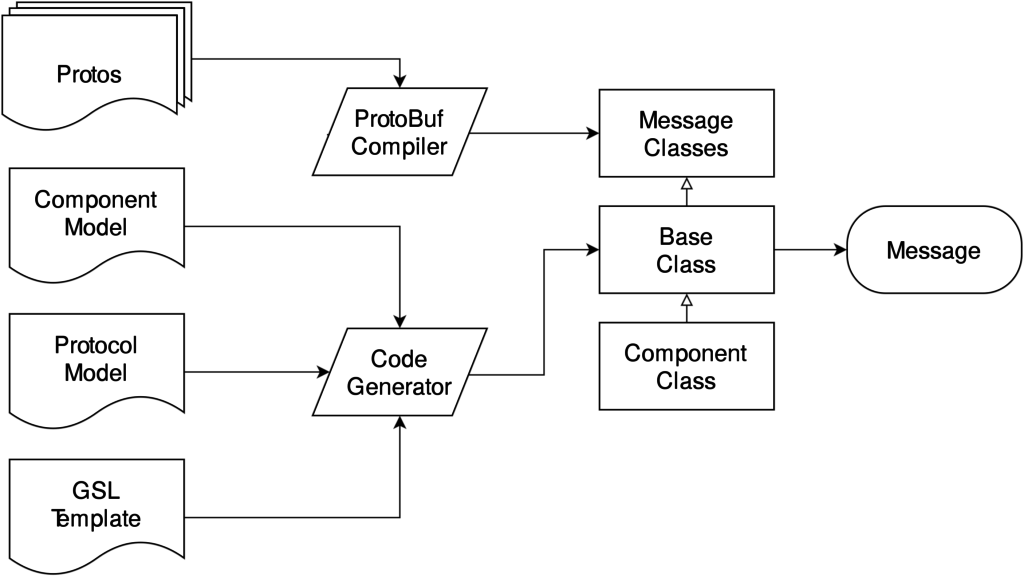 The GSL compiler converts the models into executable language bindings for multiple programming languages. The ProtoBuf compiler generates messages classes. The generated component classes use these message classes to serialize and deserialize messages.

The Machinetalk middleware separates the models into three layers.

The protocol model has two main functions. First, it defines and documents all messages related to the protocol used by a Machinetalk channel or component composed of multiple channels. Moreover, it also clearly defines the relation between the structure of Protobuf messages and Machinetalk messages.

Protobuf is a great serialization technology. Unfortunately, it lacks a few things to work as API description for Machinetalk services.

First, Protobuf itself provides an Interface Description Language (IDL) for describing messages. However, it does not include tools to describe the relation between messages.

Secondly, Machinetalk uses a single top-level container messages and sub-messages for each protocol. The reasons behind this decision have been described earlier. However, this leads to the problem that a single message description is not enough to describe the API of a Machinetalk.

An example is worth a thousand words:

The model contains the description for all messages used in a system (combination of client and server / publisher and subscriber). Based on this model the code generator produces the protocol documentation.

The state machines are defined in the SCXML format, a W3C standard for defining state machines. My favorite editor for editing these charts Qt Creator (>= 4.2), but you can also find free and open source tools from other vendors to edit the files graphically. Alternatively, you can also use as a simple text editor to modify the XML source tree.

I don't want to go to much into details about SCXML. Instead please take a look the following statechart generated by the Machinetalk dot-file generator:

The transitions and actions in the statechart have special meaning. Events can be triggered by incoming and outgoing messages, timers, and triggers and socket state changes.

In addition to the events triggered by state changes, each socket contains definitions for incoming and outgoing messages. The public attribute defines the visibility of the message interface in the resulting software class.

Please also note the use of the special tag note. This tag copies the content of a note message to the error string. I tried to avoid these implementation specific tags as much as possible.

Besides the models, the code generators are the second most important part of Machinetalk GSL.

But before I talk too much about the benefits of code generation, let's take a look at how to implement a new language binding.

To implement a new Machinetalk binding you need to fulfill the following requirements:

During the last year, I have continuously added code generators to Machinetalk GSL. Currently, the project contains code generators for the following programming languages, frameworks, and tools:

If you want to learn more about Machinetalk, GSL, and code generation I recommend you to take a look at the machinetalk-gsl GitHub repository.

Even if you are not going to work on Machinetalk GSL, I still can recommend taking a closer look at MOP to add it to your toolbox.