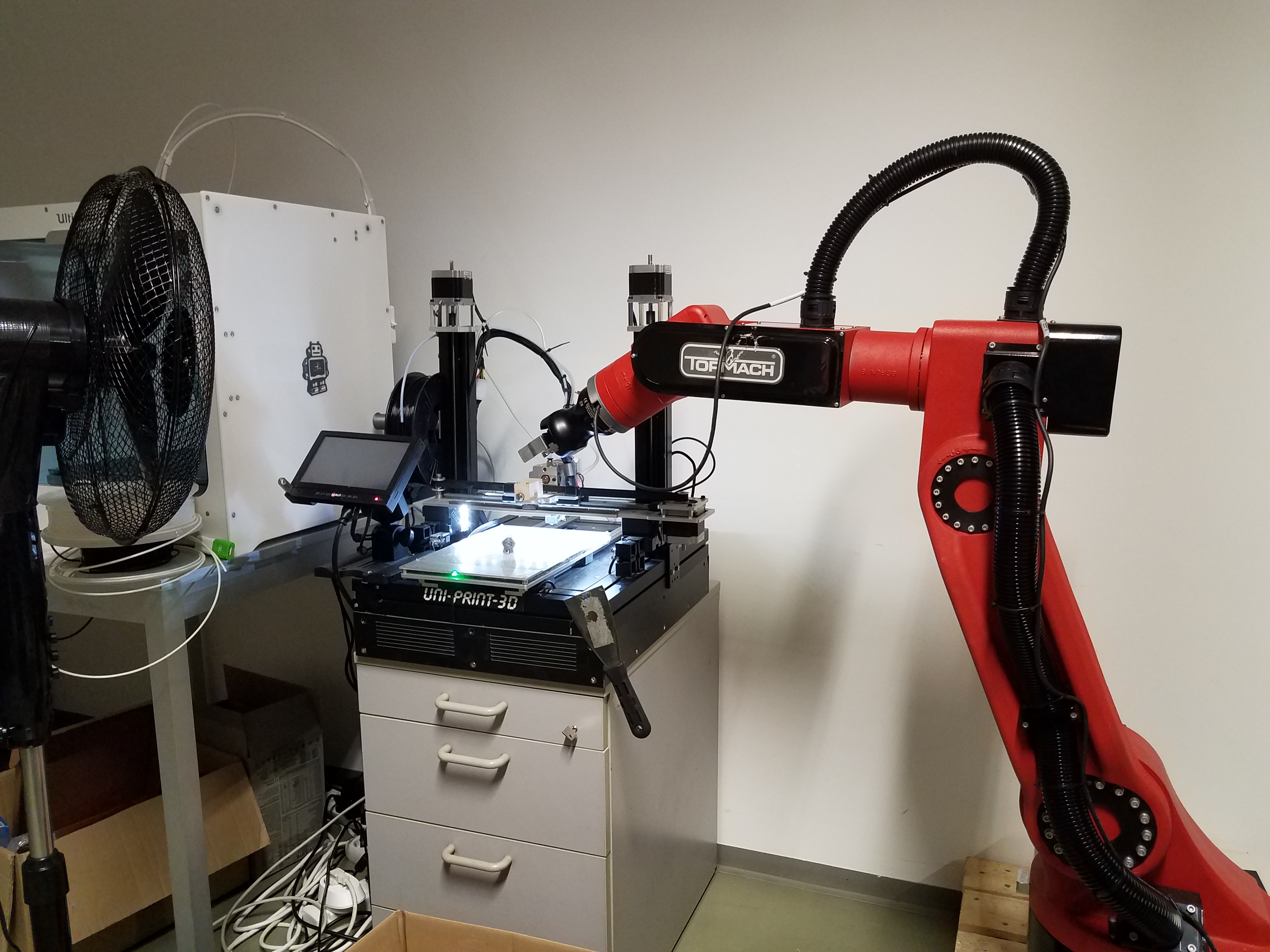 The combination of ROS and Machinekit leverages the low-level real-time motion control capabilities of Machinekit and the high-level robotic tools that ROS provides.

DISCLAIMER: The robot in the pictures and videos is not a Tormach robot, I just put a Tormach sticker on it.

The manipulator I used for my retrofitting project is a Borunte BRTIRUS0805A six degrees of freedom (6-DOF) robot arm. It can lift approximately 5kg, so it's great for projects which don't require moving around a high payload. 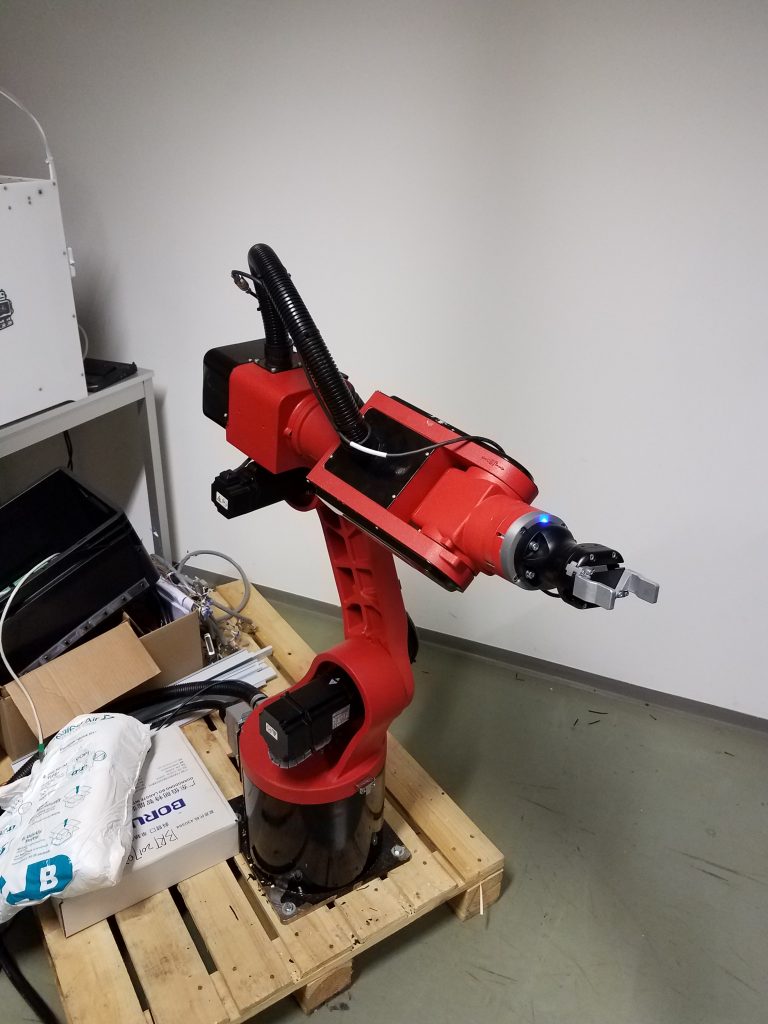 Initially, it came with a proprietary robot controller. Looking at the main board of the control computer, I could find several Lattice FPGAs, which are probably used for step generation and encoder feedback.

Moreover, it came with a control pendant, with a standard industrial robot control software, so not very intuitive and easy to use.

Since my goal was to make this robotic arm work with Machinekit and ROS, I threw out the original controller in favor of some Mesa-Electronics FPGA Anything I/O Ethernet cards. In particular, I used one 7i80 as a control interface, one 7i52 to interface with the differential-pair step-generation inputs and encoder feedback outputs, and two 7i37 Isolated Anything-IO adapters to connect the I/Os of the robot. 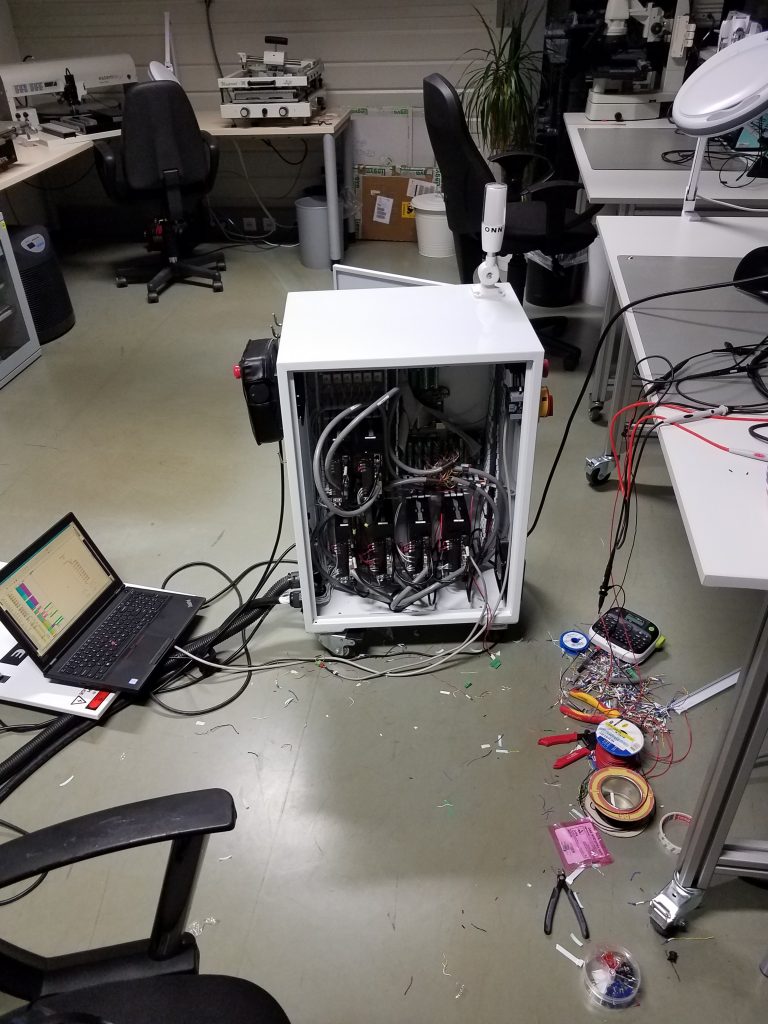 My software setup is divided into two parts:

The Machinekit HAL configuration works wholly stand-alone and does not require ROS to work. This has the advantage that further applications and projects, such as controlling the robot via Autodesk Mimic or Blender, do not depend on ROS.

The HAL configuration consists of the following parts:

The HAL configuration can be used with the real hardware or in simulation mode to test with any robot attached.

The support package contains the robot URDF description as well as configuration files for the ros_controller. Moreover, it defines the connections of the robot I/O pins and hal_hw_interface to the HAL configuration. 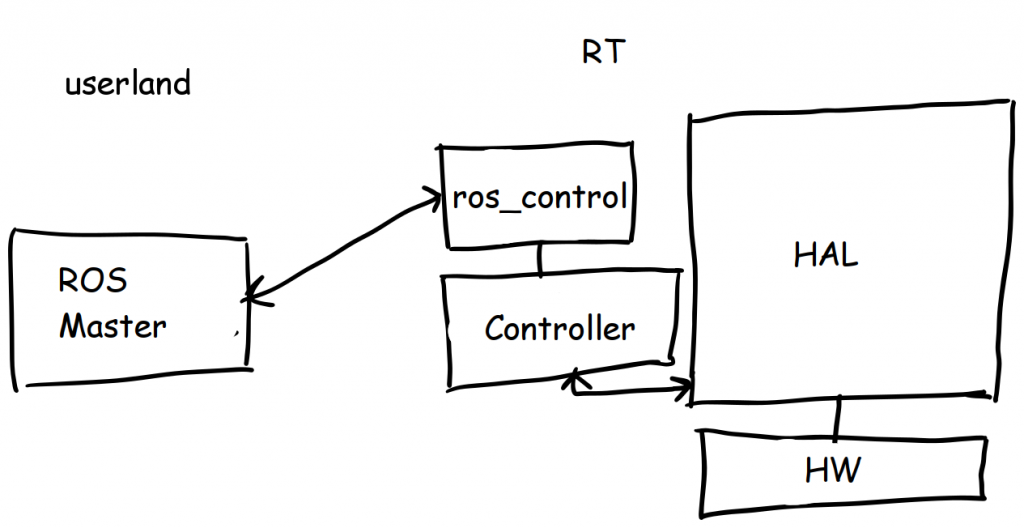 As OS we use Debian Stretch Linux with a PREEMPT_RT kernel. 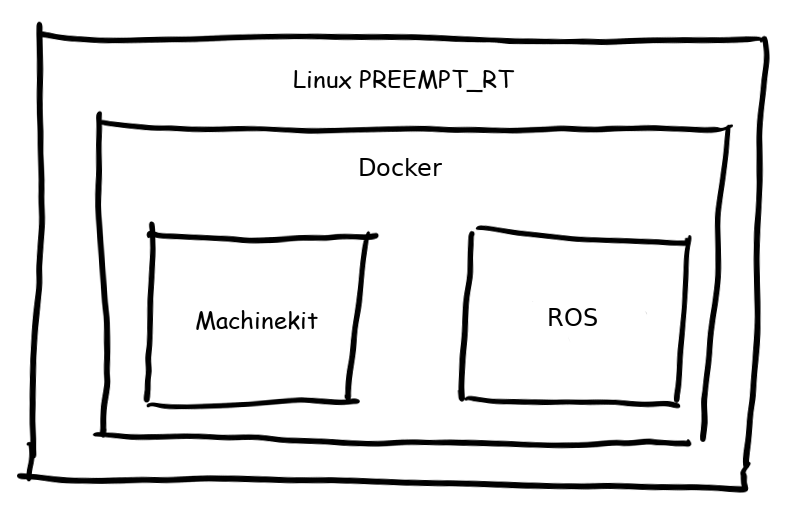 ROS and Machinekit in Docker

Two cores of the computer are isolated for use with RT processes; the other two cores run userland processes. This ensured by passing the parameter isolcpus=2,3 kernel to the modeline.

Why do we use two cores for RT and not only one? On many consumer-grade CPUs, multiple cores share the same L1 cache. Using only L1 cache for multiple processes means, that processes on one core can affect the latency of processes on another core by using up the L1 cache. Luckily, some consumer-grade and most server CPUs have non-uniform memory access (NUMA). This means that L1 cache is not shared between all CPUs, but only a CPU-set. For our computer, these CPU sets are 0-1 and 2-3.

Furthermore, we use the Linux cgroups to partition the executed processes into RT and non-RT groups and to bind to them to a pre-defined CPU set. This ensures that only RT processes are executed on CPUs 2 and 3.

Using this technique, we get RT jitter consistently below 3us, which is an excellent value.

Since the Machinekit and ROS setup is somewhat complicated to install, we decided to use Docker to run our application.

In short, the complete ROS and Machinekit installation moved into a ROS image. This has the considerable advantage that one can develop on a performant development computer and still have the same installation as on the target platform.

Moreover, building ROS and Machinekit can take some time on a low-performance CPU. Using a Docker-based setup, building the Docker image can be done on a high-performance workstation, cutting the build time in 1/10th.

An additional advantage of the Docker-based setup is that a specific project version can be matched with a Docker image. This enables testing of new installations or rolling back to older releases without any problems.

The key points to make this work is PREEMPT_RT and Open GL GUI support in Docker. Both are possible, but I will explain this in another blog post.

This project proves that it is possible to build fully open source industrial robots with Machnekit and ROS.

The source code for the project is available on GitHub. Instructions on how to set up a system for ROS and Machinekit will follow.

Moreover, using Docker not only to deploy web applications but also to deploy complete ROS and Machinekit installations proves useful.

If you have enjoyed reading this article, please leave a comment.